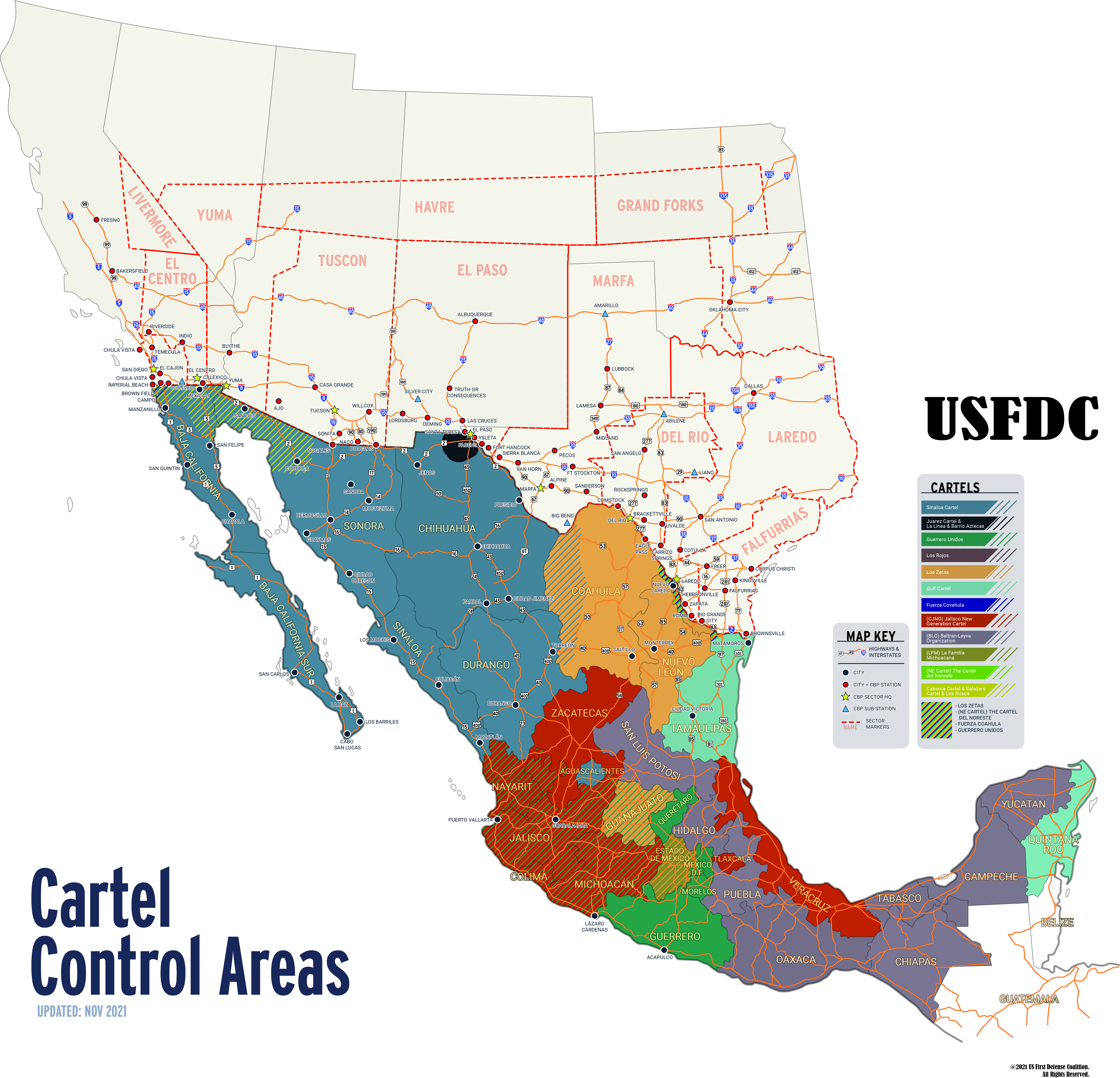 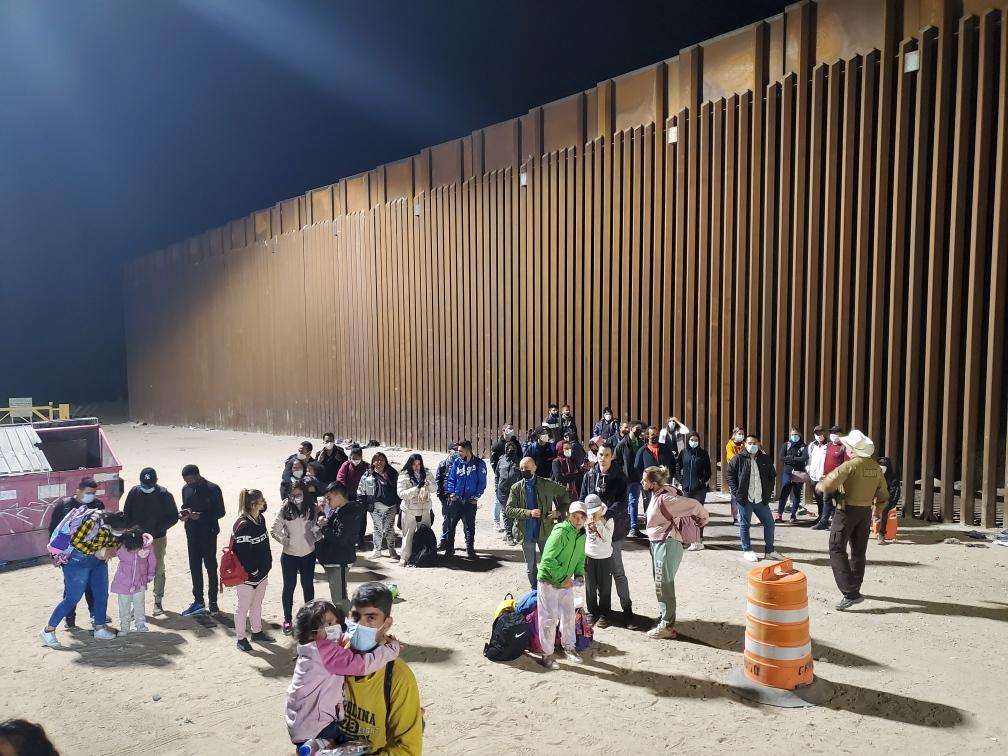 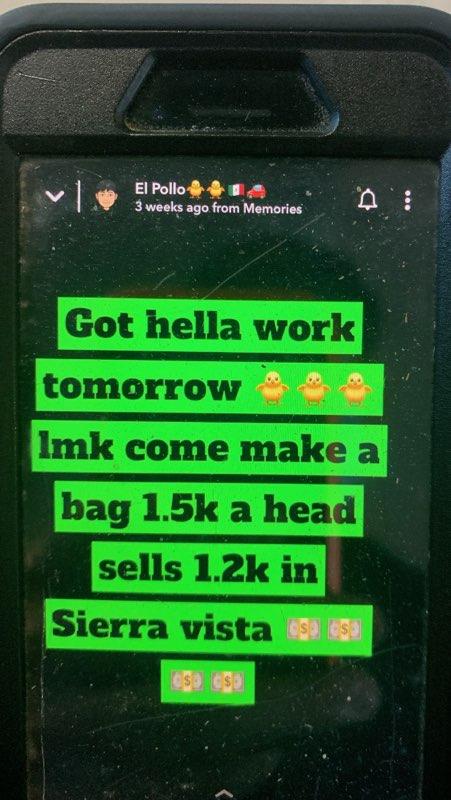 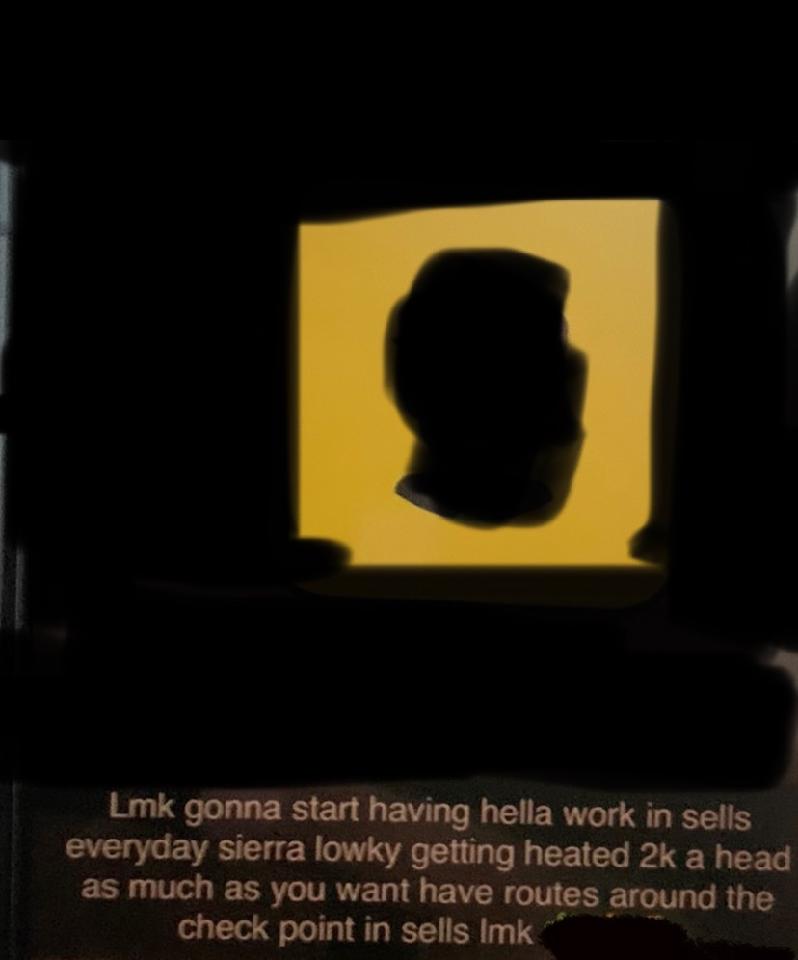 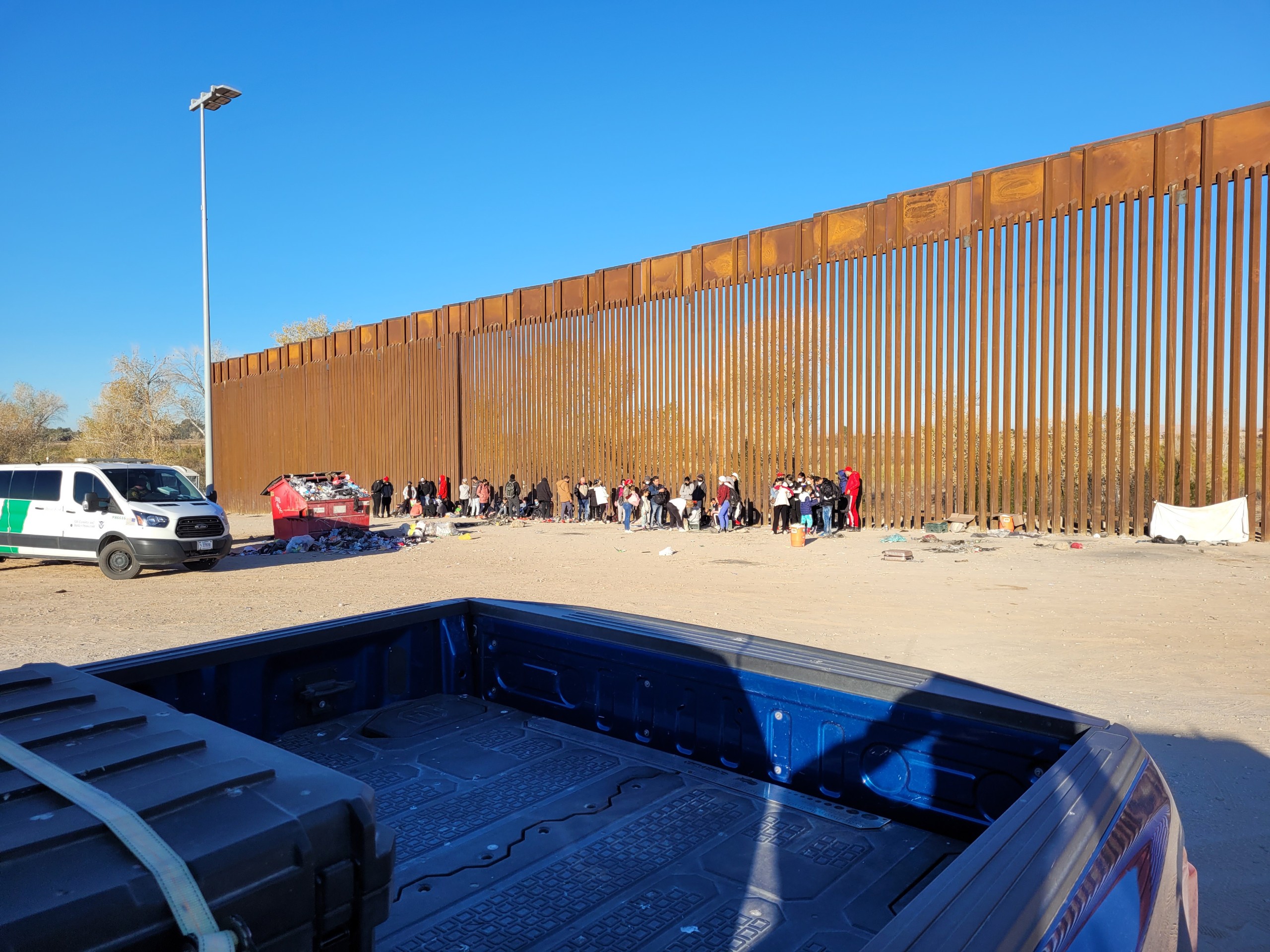 USFDC Border Report – In the shadows of Title 42
May 18 2022
I. Texas
RGV
1. Brooks county – 100 smuggling cases in the last few months. 26 bodies since January. Gulf Cartel out of Roma doing most of the work. Bailouts, stash houses, and large groups are being witnessed daily. Cocaine is on the increase and primary. Fentanyl has been passed by cocaine. Rancher near Falfurrias found a body of an IA purposely hung from a tree adding to the 101 bodies in Brooks County this year. Fire setting has stopped. Well over 200 bodies have been identified in a 10-county area along the interior RGV (Rio Grande Valley). Projection is for 300 this year. Coyotes / Spotters continue to be active across the RGV and the rural roads linking to I-10. Homes and vehicles are broken into and/or stolen along hwy 285 used to bring down fences in order to open the corridors.
2. Del Rio – Residents are bracing for an onslaught of illegal aliens. The numbers are expected to be far greater than last year. Last year during the 18,000 populated make shift camps along the Rio Grande, over 140 buses were used to bring the illegal aliens into the Del Rio sector. The buses were coordinated most probably by UNESCO / Open Border Society and Catholic (Socialist Front) groups. The coordination was and still remains a method to overwhelm all US Sovereignty enforcement. The cooperation is extended to 9 Mexican Drug Cartel’s and their DTO’s (Drug Trafficking Organizations) Coyote’s / Human trafficking mule teams. Cartels are able to easily pass-through SIA’s (Special Interest Aliens) to include probable Islamic Terrorist as well as other potential assets seeking to undermine the United States. Cost for SIA’s to enter the US is $30,000 to $70,000 each to be guided by cartel coyotes. The surges such as the Del Rio surge is designed to pull all CBP, DPS, NG, and other first responders away from Cartel Coyotes / Human & Drug trafficking mule teams.
3. The Del Rio Situation revealed the Biden administration policy. The mass of illegal aliens are moved and dispersed into interior US CBP and military stations. Then, instead of flying them back to nations they originated. They are bused and flown into US Cities and released. The media is fed propaganda that IA’s are going to be flown back to their homelands. Large numbers of the remaining IA’s are siphoned off and sent to adjacent ports of entry near Eagle Pass / Carrizo Springs, TX. The result is massive movement of cartel coordinated groups from the middle RGV up to and just beyond Eagle Pass.
4. CBP is overwhelmed and has lost control of drug mules and cartels know it. SIA’s / OTM’s (other-than-Mexicans) (RGV) – continue to evade US Border Enforcement. It’s $70,000 for Chinese nationals to cross into the US but some are using sophisticated equipment with no cartel guides nearby. Where they are going and why they are entering is unknown. Thankfully members of the Texas Volunteers have them on camera.
5. Propaganda – UNESCO – The Paris based office of education for the UN has over 9000 employees helping a worldwide attempt to overwhelm the United States. Socialist propaganda spread via Marxist elements in the Roman Catholic, Lutheran, and other “religious” organizations are aiding illegal transnational organizations. They use propaganda slogans such as “No More Deaths” as banners. Reports circulate they are aided by the Sierra Club. Inside the US the organizations are helping and coordinating IA’s to evade US sovereignty. Cell Phones and now ipads are coordinated by groups in South / Central America and then across the US.
6. Airline Vouchers – Vouchers are given for IA’s to fly by the thousands and IA’s are observed going to ATM’s and getting cash. Hotels are paid by the US Gov’t to house IA’s as they are being moved at tax payer expense to destinations across America. Not enough buses or people with CDL’s to get people caught out of the border areas. Kids are placed on regular airlines. Common IA coordinated tactic – Child when asked age is 7 years old or older. Tells agents name and place of parent and tax payer dollars are used to unite the alleged alien family. Tax payers are paying the final leg of the journey whether by bus or plane.
7. Disease – Strains of Human TB have spread into the US. Some continue to spread into cattle. Health department will not give info on the people found with TB. Parasitic disease such as encephalitis is spreading from the RGV into the US. A whole host of diseases are observed in aliens to include Covid. Expect a continued spread of diseases to include Covid in schools / work environments where IA’s find employment / education.
8. Getaways – Most of the getaways that do get caught have previous criminal backgrounds and include SIA’s (aliens from nations hostile to the US). They move quick to gain access to interstate hwys and larger interior cities. CBP reports that over 35% of illegal cross border activity gets away. Approximately 2.5 to 4 % are suspected SIA’s of middle eastern origin.
9. West Texas / the Big Bend – Groups of IA’s continue to cross – 40 to 60 at a time. Ranch fences are being cut even in remote areas. This activity surpasses numbers from any other time.
10. Hudspeth County – Bodies continue to be recovered. County deputy injured in a head on collision purposely done by an IA to deter enforcement. The county is having to raise taxes in order to keep up basic community functions (first responders, schools, jail etc.). local resources are being drained weekly. Over 3 % of illegal aliens getaways are SIA’s (Middle eastern).
11. Texas – Cost to sustain border control efforts is nearing exhaustion. The glaring danger is the number of SIA’s that crossed and were never seen due to overwhelmed local resources.

III. New Mexico
1. No change. Continues to be wide open. Much of the border is nothing but a single barbed wire. The state is controlled by an open border democrat party. Residents are asking for help along the border especially in parts of the boot heel region. The Boot Heel region is wide open. Large groups have been spotted. All wearing carpet shoes to avoid tracking.
2. The arid / low humidity of the area makes tracking via dog very difficult. CBP redeployments to Del Rio results in few apprehensions. The likely hood of SIA infiltration in these groups spotted by ranchers is most probable. Ease to access points from Mexico to I-10 make high value IA’s / human smuggling less complicated. High speed chases mostly involving CBP are occurring.
3. Vehicles have been stolen and used in a similar fashion as Texas. Fences have been cut and vehicles abandoned. Numerous locations have been documented where illegal cross border traffic dispose of carpet shoes, camo clothing, back packs, blankets etc. Using GPS / Cell Phones the groups rendezvous to designated points. They discard old items, clean up and change into new clothing. The result, litter everywhere.
4. The Coyotes (guiding drug mules / human smugglers) – Wear camouflage clothing and are armed. They discard camo clothing at points in the US and change into regular street clothing as they return. Deming, NM continues to be wide open.
IV. Arizona
A. Tucson Sector
1. April – Sabre team in the Tucson sector alone had 8000 getaways on cameras. About 50% were apprehended and given over to CBP. Those that did not have any offenses / drugs will be turned loose. Only 3 to 5 agents (CBP) on patrol. The majority of illegal aliens are military age males – smaller numbers of women and children. They are caught in camo. The cartels are letting each carry a day pack – tooth brush, underwear, 1 liter of water. And a good cell phone which can’t be taken when apprehended. Street clothes are under the camo.
2. High speed chases have become a weekly occurrence. The drivers are recruited from high school age on social media. The driver gets an App on the phone with data on where to pick up. $1500.00. per person.
3. DPS – this past Monday pulled over a vehicle with suspicious passengers. The driver took off went through a ranchers fence heading back to the border. That rancher has had so many illegal vehicles that new gates had to be put up. Only the driver was caught the others went freely into Mexico. The several gates destroyed has to be repaired at the rancher expense.
B. Yuma Sector
4. Yuma area – Over 170,000 Illegal Aliens apprehended since January from 95 different nations. Currently over 1200 people apprehended daily. Over 20,000 getaways so far this year. The getaway number representing 40 % of those that cross. 20 bodies have been recovered since January. Much of the area is very sparse thus many more bodies have most likely not been located. The Illegal Aliens via UNESCO / NGO’s are being flown to the city of Mexicali and given a bus or cab ride to Algodonez and simple walk across a shallow Rio Grande into Yuma.
5. Most traffic in the eastern part of Yuma are Mexican nationals in camouflage clothing and some wearing carpet shoes to avoid being tracked. Western part are in street clothing and are coordinated by human smugglers to pick up at designated GPS locations. Old clothing, carpet shoes continue to be discarded at these locations leaving piles of garbage.
6. Meth is being found across the Yuma sector in day packs supplied by the cartels. They appear abandoned but are more likely placed in coordinated areas via GPS. The Sinaloa continues to be the most sophisticated organization well placed across the US. Opium mostly comes from Afghanistan. Causing immediate threats to US national security from terrorist.
7. The border in Arizona will never recover.
https://www.fox10phoenix.com/news/backpack-filled-with-meth-heroin-found-in-southern-arizona

V. Conclusion
All 39 border counties are facing the largest onslaught of illegal cross border traffic in history. The effort to overwhelm all US enforcement is part of a transnational operation. The aggregate numbers of illegal aliens entering the United States is impossible to determine. The danger to the citizens of the United States is imminent. UNESCO / Open Border groups realizing the success are coordinating across Central America with the end of title 42. An Estimated 2 to 3 million additional illegal aliens will cross between May to December 2022. Add that to the 2 million (known) illegal aliens that have crossed since October 2021. The true numbers that have crossed is impossible to determine. Much of the border is wide open with no consistent enforcement. It is likely 25 to 30 million now reside in the US. New fentanyl derived components are coming into Mexico via China and have caused overdoses in the United States. Well-coordinated drug mule groups fan out to different points for pick up. Using sophisticated technology (GPS), aliens with many criminal offenses have crossed and even recrossed into the US. As many as 42 that managed to get caught were on the terror watch list. The numbers of dangerous SIAs (Special Interest Aliens) is unknown. The cities and neighborhoods these criminal aliens are heading to is unknown. 2 to 4 percent of IA apprehensions and getaways are potential SIA’s. The likelihood of attacks upon the US is alarming. The impact of hundreds of thousands of newly arrived, untested / unvaccinated IA’s is a medical concern. Watch for hepatitis, measles, covid, tuberculosis, and other viruses.
We suggest US residents keep a UHF / VHF radio scanner nearby to hear information from local sheriffs and first responders should any terrorist attack happen. In such areas, cell phone use may be limited.